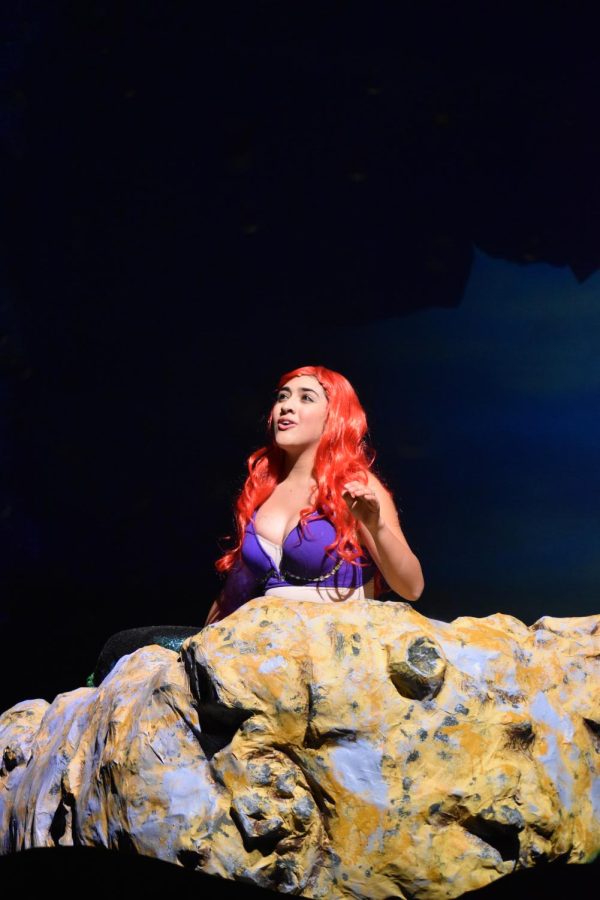 The girl who has everything \\ Junior Miriam Stone performs as Ariel in this year’s theatre production, The Little Mermaid, Oct. 7.

How and when did you get into performing?

I’ve been singing ever since I was in my kindergarten church choir! And my first time on-stage doing a musical was in 2nd grade for a small worship kids church production. Ever since then I have had a passion for performing. I then got into dance for a while where I competitively danced with the Dance Company of Wylie for five years of my life up until eighth grade. I’ve been in choir since sixth grade and joined theatre during my seventh-grade year at Burnett. I’ve also been in choir and theatre for the entirety of my high school career so far and plan to continue that way.

When did you know you wanted to play Ariel?

I’ve always enjoyed doing musicals for the overall process and the bonds that are created by building friendships with the cast and crew. And ultimately that is why I audition, not for the recognition of being a lead, but because I love the family that we build throughout the process.

As Ariel would say, it was “beyond my wildest dreams.” I have understudied the lead for both my freshman year musical (Ellie in “Freaky Friday”) and my sophomore year (Anya in “Anastasia”), so I guess it has been a long-awaited and hard-working opportunity. But in the end, it was amazing; it was so fun to get to be everywhere at once and be involved so much with the show. Of course, it was difficult and rough at times, but once I really discovered who my “personal Ariel” was and could just have fun and step into a mermaid’s shoes (or fins), it got easier.

If you could play any other character in the musical, who would it be?

What did you most enjoy about performing last week? Was there a particular moment you enjoyed most?

I always enjoyed the moment right after I belted the big note for “Part Of Your World” and there was just a split-second of silence. It felt like it was just me on the stage singing my heart out. Then as I ended the song, it was like I got to share my happiness and love for music with the audience.

What have you learned about yourself since starting the production?

I have learned that balance and time management is key. You must take care of yourself and your vocal cords when doing something as gigantic as this musical. Not only were there early mornings, late nights, and many rehearsals with singing and dancing and acting, but there was also All-State for choir and homework for school. All of these things felt so exhausting, especially dress rehearsal and show week, but I couldn’t have done it without the amazing support from my loving directors and my wonderful parents who constantly encouraged me to stay hydrated and rest as much as I could.

What other activities are you involved in? Any hobbies?

I am vice-president of the International Thespian Society and Historia for Choir.  I’m kind of involved in robotics but still figuring that out, and I’m currently trying to earn my membership for STUCO.

What are your plans for the future?

Color that represents your personality: This is kind of weird but my favorite colors are based on the seasons and time of year- I love yellow in the spring and summer, but I’ve also really grown to like dark purple (fall/winter).

Favorite musical: I don’t think I have a favorite yet, but I really enjoyed watching Hadestown!

Favorite quote: “’ What if I fall?’ Oh but my darling, what if you fly?” This quote really just emphasizes the fact that you’ve got to try and do everything you can because you never know what the outcome might be.