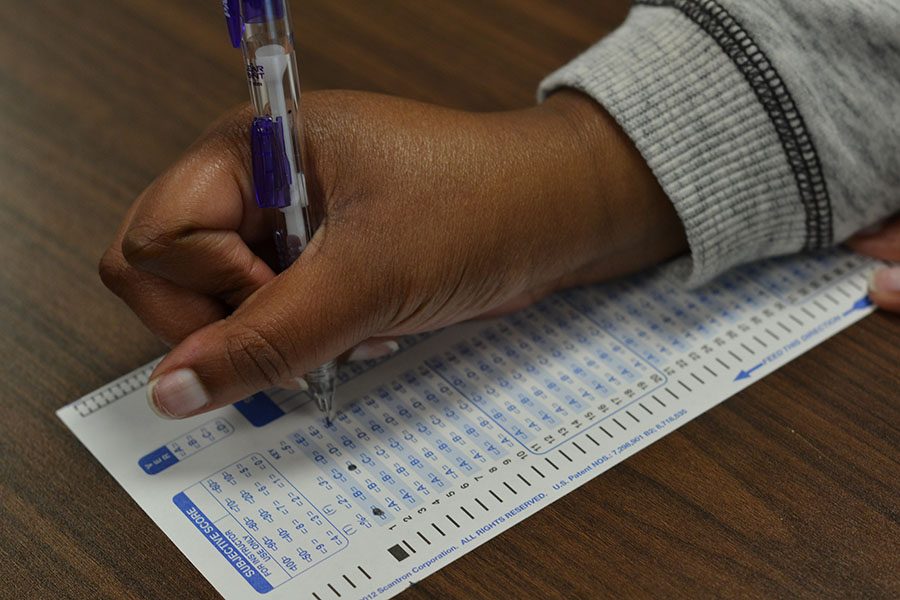 Exams’ exit \\ The week before Christmas used to be ‘exam week.’ Now students are learning new material and even learning life lessons.

Four years ago this week, all teachers were required to give semester exams.

Gone are the days of the last week of a semester being devoted to reviews and tests. Gone are the days of ‘exam schedules’ when students attended classes out of order, taking two comprehensive final exams in the morning, then attending two review sessions in the afternoon.

And as a result of the elimination of semester exams, gone are the days of students having a taste of what to expect during finals week in college.

Even though I hated those things [semester exams], they shouldn’t have taken them away.”

Class of 2017 graduate Eunice Olajimi was a sophomore when final exams were done away with in the district.

“Even though I hated those things, they shouldn’t have taken them away,” Olajimi said.

As an honor student in high school, Class of 2018 graduate Mary Harkins said that she still felt prepared for college finals due to her experience with other testing situations in high school.

“Compared to AP tests, tests in college are way easier,” Harkins said. “You have more time to take a test and you have entire days before-hand with no classes so you can study a ton.”

With the absence of final exams, so is the incentive for students to avoid missing school.

“I have watched the decline in attendance rates since we have done away with finals,” AP English IV teacher Sharyn Vernon said. “Previously, students would make attendance more of a priority as well as their grades, so they could get their exam exemption.”

Prior to the school district’s announcement of doing away with exam weeks, exemptions encouraged students to attend school regularly. Semester averages, number of absences and sometimes whether or not a state test was passed, determined whether or not students could earn exemptions from semester exams.

Alumna Gwen Murphy, a sophomore at the University of North Texas, thinks taking semester exams in high school should be a staple of curriculum to prepare students for college.

“While comprehensive exams seem like a burden, they are great checks to make sure you’re keeping up with all the material, especially for classes pertinent to your major,” Murphy said..

Hephzibah “Jimi” Olajimi graduated from East in 2018. She is now studying International Business at the University of Texas.

“[The lack of final exams] made Wylie kids think they were geniuses, when no one really properly learned or retained information,” Jimi said. “If they kept them, it would require students to actually learn material and put more effort into developing better study habits.”

“There were definitely times where a kid failed to turn in work and then his exam grade got him over the hump and other times where a kid was scraping by and the test grade dropped him,” Science Teacher Mr. David Shipp said.

He has mixed feelings about the absence of semester exams. On one hand, he feels finals held students accountable for retaining knowledge of material, on the other, Mr. Shipp said they could impact the mental and emotional health of students.

“[End-of-semester exams] added accountability that is really consistent with the college experience and added an additional review and recall of content, which should help students remember the information longer (as opposed to testing it only once during the unit taught),” Mr. Shipp said. “High school students tend to already be overstressed, overworked and overcommitted in terms of time they spend in their activities and studies.”

Not having semester exams doesn’t just give Mr. Shipp more time to continue teaching his subject matter, but he says  it gives him an opportunity to expose his students to “things they don’t teach you in school.”

“That last week of the school year I teach kids to cook, pay bills/taxes, change a car tire, etc. It also reduces the stress of needing to grade exams within the time allowed,” Mr. Shipp said.