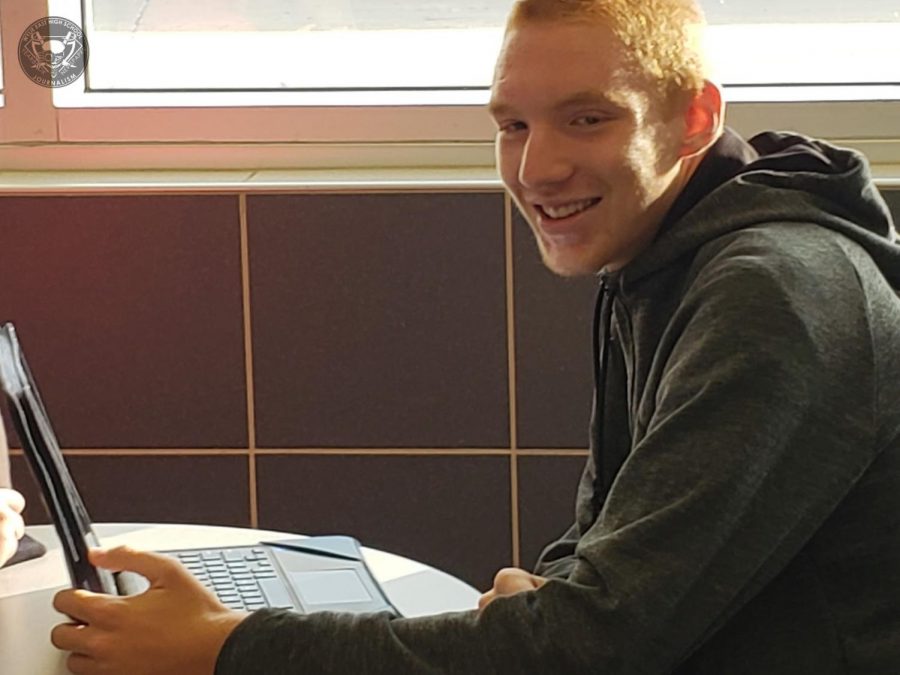 On top of it// Working on school before class starts, sophomore Peyton Gilligan smiles as he pauses the conversation he’s having with his friend.

He has been playing video games for years. He likes to jump on his trampoline for exercise and fun. Long story short, he is Peyton Gilligan.

What is your favorite activity outside of school?

If I’m not busy drowning in all the work from AP World History or just reading a book, I tend to play Rainbow Six Siege.

What is the goal of Rainbow Six Siege?

There are three game modes. Secure Area, Hostage and Bomb. In secure area, the defending team gets one minute to fortify a specific room voted on by the team. The attacking team needs to either kill all defenders or stay in the room when there are no defenders for a certain amount of time. The defenders also have the option of killing all five attackers or waiting until time runs out. Hostage is the same, but instead of just being in a room there is a hostage that the attackers must pickup and get to a designated area. If the hostage dies whoever killed the hostage receives a loss for their team and gives the opposing team a win. In bomb, there are two bombs typically in adjacent rooms and the attackers are given a defuser that must be planted and defended until it either finishes or a defender breaks it.

Are you on a team?

No, but sometimes I’ll squad up with friends and do some ranked. And then drop in rank.

Do you participate in any tournaments?

No, I hate being in the spotlight.

Do you make any money from ranks?

Nope. I don’t get anything other than more inside jokes to make with my friends.

How did you get into the game?

I found a twitch streamer who was playing it and got interested.

How long have you been playing?

I’ve been playing since Operation Health which was a little over two years ago.

What keeps you playing it?

New content and the hilarious bugs you can find at random. And recruit rushing. Recruit rushing is an unstoppable strategy and the best strategy; nothing you say will change my mind.

The next Wolfenstein game whenever it comes out. Hopefully.