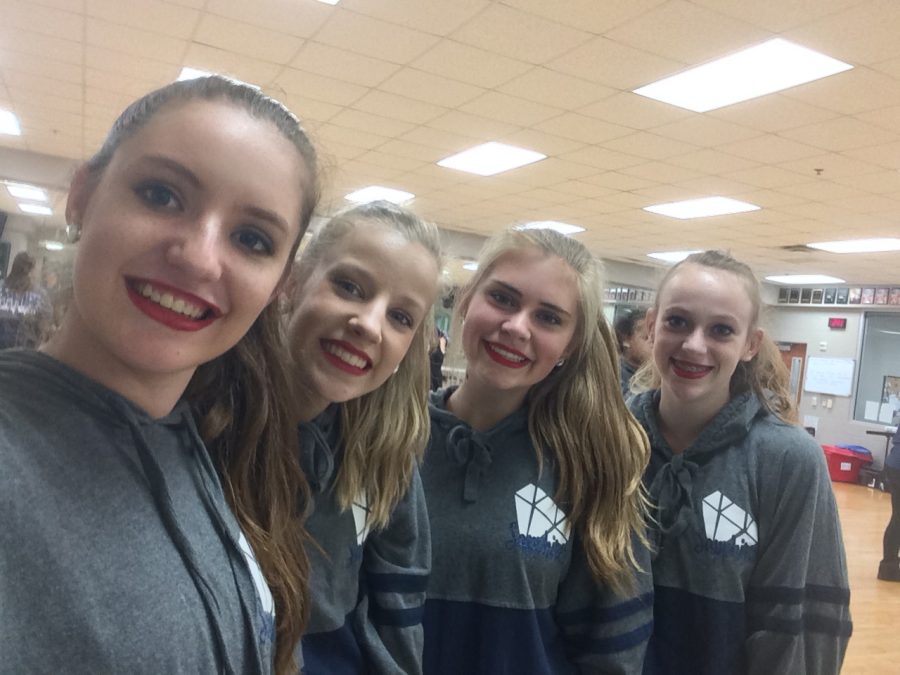 A day in the life of a Sapphire: Homecoming edition

For nearly every organization, homecoming is the busiest time of year. With four separate performances in a single day, this year’s Homecoming was absolutely crazy for the Sapphires. So, I, Addie Orr, your friendly neighborhood Sapphire Sergeant and newspaper staffer, will be taking you through a game day in my life.

After a 5 a.m. wake up call and sleeping through two alarms, I put on full stage makeup. After an hour of covering my face in powders, I put on my uniform and triple checked my bags. Soon, Junior Lieutenant Kylie Combest picked me up and we left to greet and open car doors for Watkins Elementary students. After 30 minutes of greeting children, we threw on our practice clothes and scrambled to get to the field at the school for rehearsal with the band.

Field practice kind of went horribly wrong. The band played our music and… it wasn’t actually our music. It was quickly discovered that it was the same song, but a different arrangement. Mrs. Brittany Miller decided the music would be played over the loudspeaker in the stadium. I thought to myself “I don’t know how this will go, but the dance looks really good and clean so it should be okay.” Then, we cleared the field and headed to the stands. There, we yelled “Hey Band!” The band (thankfully) responded, “Hey what!” We then presented them with a sign, and they responded with tentative cheers. We sprinted inside and quickly ran our pep rally routine. Those of us chosen to be in a special performance for Hartman snagged our bags and threw them in our cars. We raced over to First Baptist Wylie to greet people and perform a routine at the Hartman Blue Ribbon School celebration.

Hartman Elementary earned the title of Blue Ribbon school, which is a massive honor. Because of this, a select group of the team was chosen to perform at a celebration full of guest speakers and praises for Hartman. The performance was in way too tight  of a space but somehow, we managed to make it work. First, however, we had to be greeters and ushers. Funnily, my elementary school, Smith Elementary, was the only school to not have a mascot. Instead, they sent a sign congratulating Hartman. And, for some unknown reason, they needed a Sapphire to hold it. And Mrs. Miller chose, you guessed it, me. It was actually pretty fun, despite me having to take way too many pictures with laughing Wylie ISD administrators. After becoming practically Facebook famous, we went inside and watched the many presenters, including Texas Senator Craig Estes and United States representative Pete Sessions. We performed our routine and the crowd erupted into applause. We shuffled back to our seats and watched the rest of the celebration. After it was over, we filed out the doors of First Baptist Wylie and headed on to lunch, where I  munched on a corn dog from Sonic with some of my favorite people.

Along with their celebration at First Baptist Wylie, Hartman hosted a parade, which snaked through a couple of neighborhoods and in front of Hartman. I was chosen as one of six Sapphires to ride on a float in the parade, which one, made me feel like I was the chosen one, and two, was way better than the alternative (walking). Although, I almost fell about 7,000 times (might be a slight exaggeration) . My grandparents decided to surprise me by showing up along the route to watch, which was pretty cool. After finishing the parade, we went into the school and handed out water bottles to all the classes, which just goes to show, we as a group are constantly somewhere between servant and celebrity. Sometimes, we work so hard and constantly give that I almost forget why I’m there. Then a little girl will come running up to me when I’m in my uniform and give me giant hug, and it makes it all worth it.  Half the team boarded the buses and the other half went in their cars back to the school to get ready for the pep rally.

The pep rally was semi-successful. The dance went extremely well, if you ignore the fact that the DJ messed up our music… again. The music got stopped midway through the song, and it took a minute for the team to catch on because of the repetitive nature of the song. I had about 30 minutes eat, shed off the hip hop uniform and put on my field uniform, but I was hopeful and excited for the performance. I grabbed some Chicken Express to be my fuel for the game.

The game was loads of fun, but I was kind of glad my day was over. Our performance went pretty well, despite a few memory mistakes. I was extremely excited though, because I actually got to watch the band from above (my brother is in band and I absolutely love watching marching shows), which was a rare treat as I am usually down on the field, still recovering from my performance.  The show was phenomenal, and I can’t wait to see how they do at UIL. Soon, everyone gathered their things and left the stadium. It was a long, hectic day full of non-stop smiles, and I was so glad I could finally go to bed. Finally, I take down my hair, wipe off all the performance makeup and take a nice, long shower.

After being awake and smiling for 19 hours (my cheeks was exhausted), hanging up my hat and crawling into bed at 12:00 a.m. was a huge relief. At the end of the day, I asked myself from under about 18 blankets, was it worth it? Absolutely. I loved riding in the parade, seeing the band from above for the first time at the game and just having time to do what I love most: hang out with my best friends and dance.