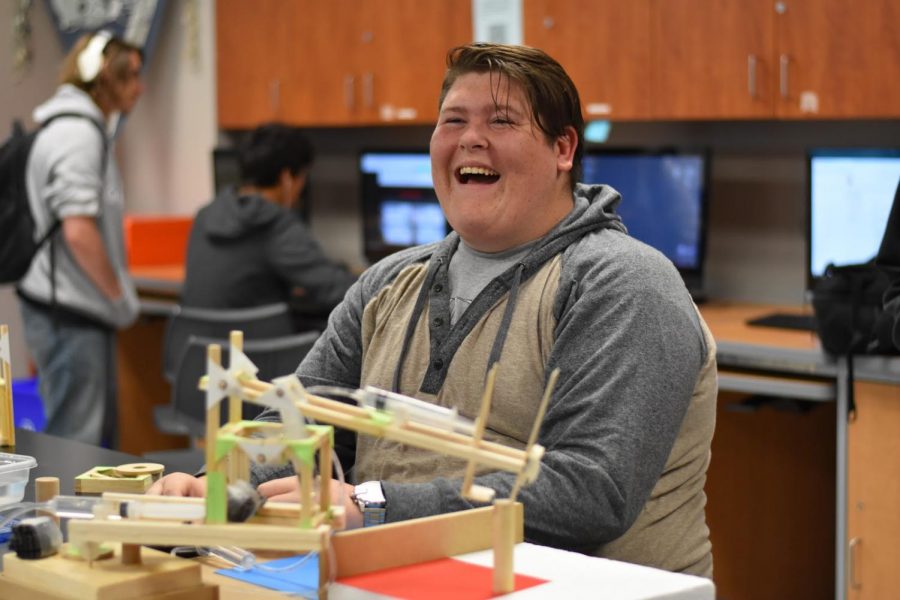 The National Fluid Power Association (NFPA) hosted the nation-wide Fluid Power Action Challenge in an effort to encourage fluid power and engineering as a career and bring awareness to the opportunities the field provides.

They only gave us instructions for one part of it. The rest we had to make on our own. They gave us a basic idea, but we had to do all the work from there.”

“When I was younger, my dad worked for a lot of construction companies so I’ve always been around construction, and it always really amazed me how the little details could have such a big impact on the world and so I’ve always wanted to do that sort of thing,” Scroggins said.

In the competition, students were challenged to design and build a fluid powered (hydraulic) mechanism to solve a problem; in this case, pick up weighted objects and place them on a platform.

“They only gave us instructions for one part of it. The rest we had to make on our own. They gave us a basic idea, but we had to do all the work from there,” Villa said.

With only two weeks provided by the competition, the boys had to quickly get to work building a portfolio and creating their mechanism.

“If we had a little more time we could have come up with a better claw mechanism, but we had to make do with what we had,” Scroggins said.

Their hard work paid off Oct. 5, however, when their teacher, Mrs. Candice Lawrence, surprised them by announcing that the two were state champions in, not only the challenge, but also in the portfolio they sent in. That day, the pair added to their portfolio and sent it in to the national competition, where they prevailed as champions again.

“I kind of felt weird. It’s not that I didn’t expect to get [state champion], but it’s always cool to hear that you did and you get the opportunity to have such a big impact,” Scroggins said.

From the state win, Scroggins and Villa earned their engineering class a $500 grant, which Mrs. Lawrence intends to use to buy more equipment for the class.