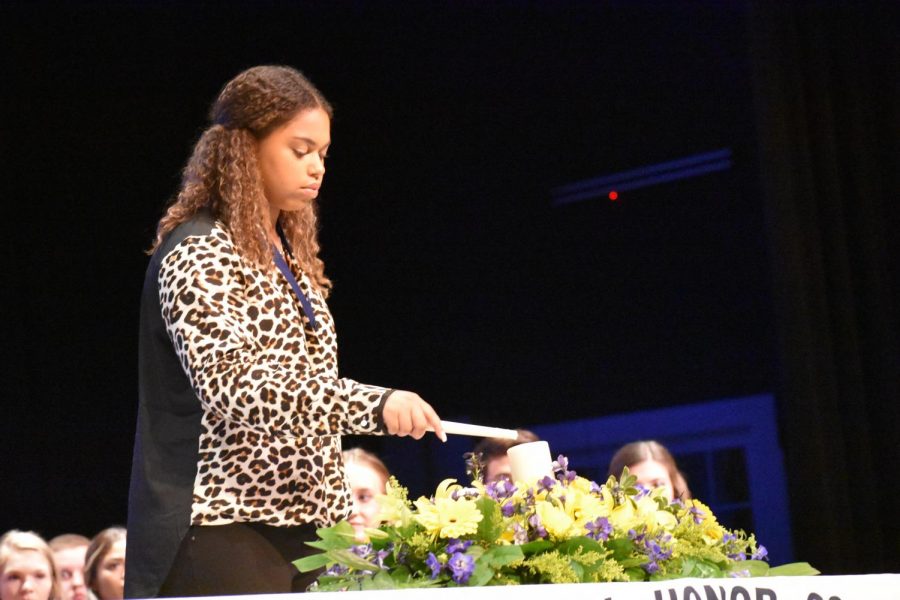 Light the world // Illuminating the stage, treasurer Nia Carter lights one of the candles that represent the pillars of NHS at the induction ceremony Oct. 30. “The pillars are characteristics of a dedicated student that pushed themselves to achieve high goals,” Carter said.

A collection of a 3.5 or higher GPA, a student’s areas of service and a student’s character places this year’s juniors and seniors in the running for a chance to be inducted into the National Honor Society.

“I was very proud of myself for working this hard and earning this honor,” junior Katie Borchetta said. “I was also a little embarrassed in front of my class, but still proud.”

NHS hosts service events around the school and the district, including the blood drive and Winter Wonderland dance. These events give students opportunities to serve and use their leadership to give back to the community.

“My favorite service event is the Winter Wonderland Dance that NHS hosts every year for special needs students in our district,” NHS president Angela Lamarche said. “It’s so much fun to prepare for the dance, and it’s a blast.”

She continued to speak about her own college experiences, more specifically almost failing out of school with a low GPA.

“Who has two Workable Thumbs and was about to fail out of college by point two points? Yup, ME!” Smith said.

The end of her speech ended on a positive note. She informed each student, and parent, how it’s perfectly okay to fail.

“Now stop being fearful of the F word & embrace it,” Smith said. “Go forth my fabulous kiddos and fail! Fail forward to success.”

Afterward, each officer lit a candle and explained each pillar of NHS.

“The pillars are a constant reminder of what each NHS member needs to demonstrate,” historian Lauren Vasquez said.

The new inductees were then called up to the stage, given an induction certificate, signed their name into the register, and took a picture with their honored guest.

“My honored guest was Mr. Cravens,” new member Audrey Wentz said. “He’s always been an important figure in my life.”

Finally, the night ended with a reception in the cafeteria with refreshments for the new members. This reception acted as another congratulation for their accomplishments. The students could also take pictures with their friends and honored guests to share their new honor.

“I feel privileged to be a part of a prestigious organization like NHS knowing that group is dedicated to serving the school and community,” new member Esteban Figueroa said. “I feel like it’s fitting for me as a person who always tries to change lives and be a servant leader for anyone.”