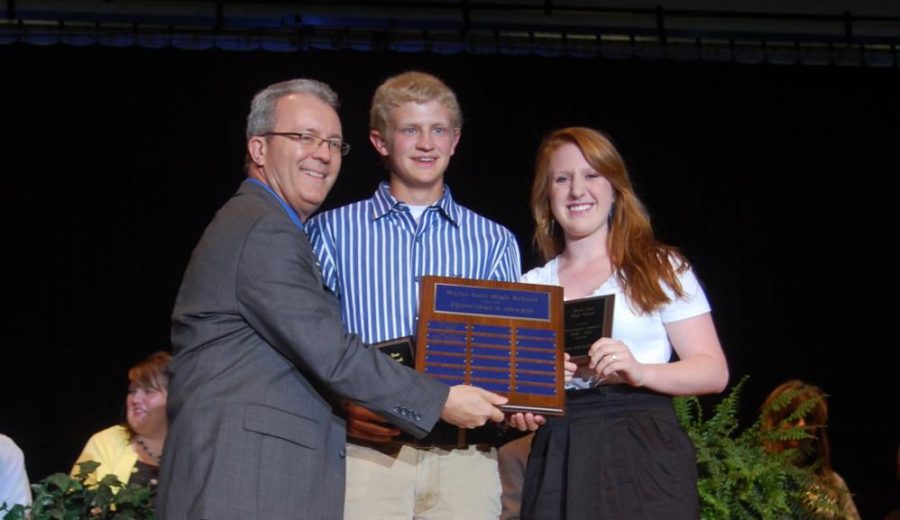 In the beginning \\ Principal Mike Williams presents alpha class members Chance Grantham and Cassi Springfield with the principal’s award at the first-ever senior awards ceremony in 2012.

Principal Mike Williams has been at the helm of Raider Nation since the once ‘new high school’ in Wylie was established in 2007.

He is the only principal the school has known since it opened its doors 13 years ago.

Mr. Williams announced his retirement Friday, April 24 to his staff during an online faculty meeting in Google Hangouts.

“I know the time is right for me to make this decision on the next chapter of my life,” Mr. Williams said. “I have thought and prayed about it, and while this school year is not ending the way any of us could have imagined, I truly believe this is what is best for me, my family and Raider Nation.”

Coined an “alpha staff” member, counselor Ms. Jessica Taylor has worked with him for 13 years. She was surprised when he made it official.

“I think what we have all known it was coming in the next few years, just not so soon,” Ms. Taylor said. “I am so thankful for all the opportunities that he gave me to grow professionally. He is a major cornerstone of my career.”

Even though students and faculty in the district did not return after spring break due to the COVID-19 pandemic, Mr. Williams retirement will not take place until the end of the school year.