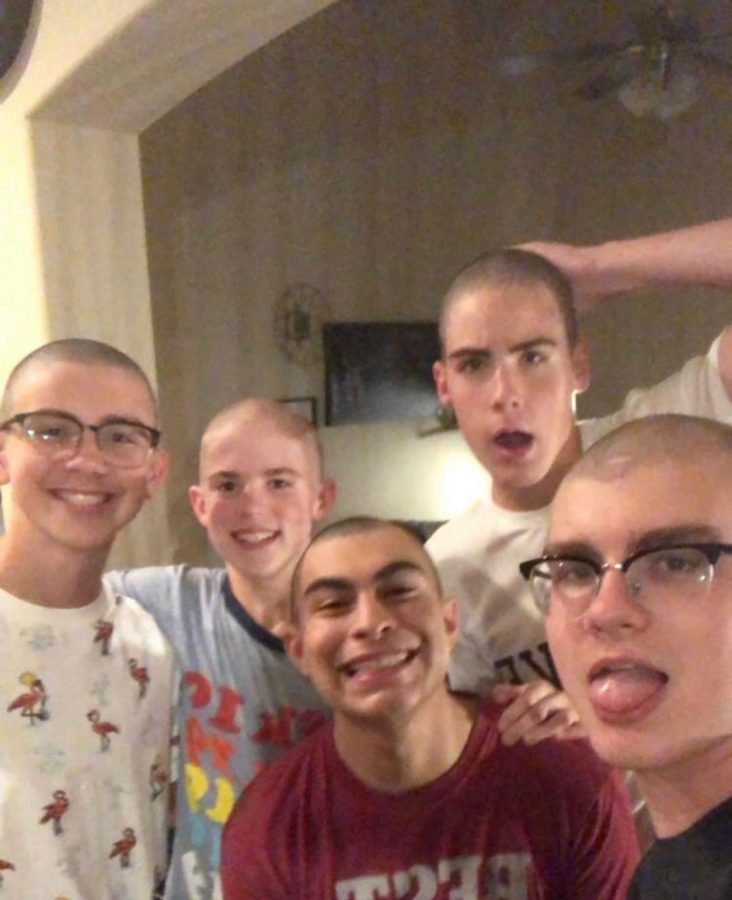 Snip snip \\ Posing their new looks, junior Hayze Gore (second from the left) and his four friends enjoy the feel of the fresh air on their heads after a new shave in support for their friend battling cancer.

The usual feel of a scissor snip results in a fresh new trim, losing only about an inch of hair. Looking down on the floor and seeing a small amount of hair is normal, but it’ll grow back in a few weeks, right? In this case–wrong. Junior Hayze Gore walked confidently with the mindset of “just a trim,” but ended up getting way more than that.

However, the locks were lost Sunday, Sept. 29. Gore and four of his friends went to one of his friend’s houses and then the cut began, resulting in five fresh new buzz cuts.

“Over the summer, my friend Lauren Hutson, that I know from church, graduated from Sachse High School,” Gore said. “But right before classes started at Collin College, she was diagnosed with a form of cancer called Lymphoma.”

Lymphoma begins in the lymph nodes. The most popular and used treatment for lymphoma is chemotherapy, which can cause hair loss in the patients receiving the treatment.

Gore and his four friends wanted to show support for Hutson by shaving their heads to put themselves in her shoes.

“While we were all shaving our heads we face-timed,” Gore said. “She thought it was so funny and cool, but also so sweet.”

Afterward, Gore had to return to school looking a little differently than usual. Typically, it was normal to pass him and maybe wave or smile. But now, he receives a lot more glances and double takes than he’s used to.

“At first, all my friends and pretty much everyone thought it was weird,” Gore said. “They couldn’t stop touching and rubbing my head too. But mostly everyone is used to it now.”

Even though Gore’s head became the new buzz, people loved hearing the story of why he did it and who he did it for.

“I felt really good doing this for her,” Gore said. “It’s nice when you get to support one of your good friends for a good cause.”