Dancing through the decades

Sapphires reminisce on attending clinics when they were junior jewels 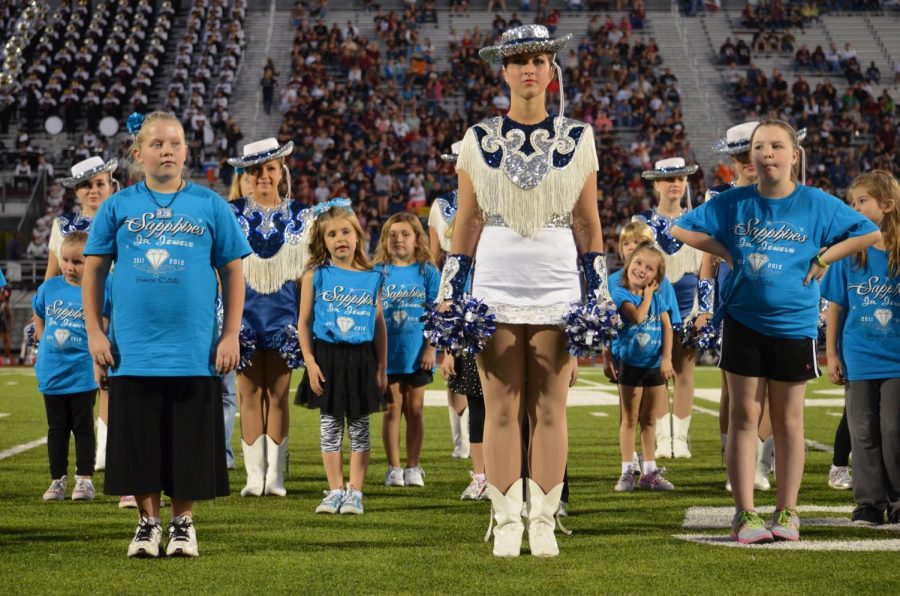 A look back \\ Little did journalism adviser Mrs. Casi Thedford know that the photo she was taking of her daughter seven years ago would be used to showcase current Sapphires when they attended the Junior Jewel clinic as young girls. Senior Jordan Smith, on the front row, far left, attended the same clinic and is now an officer on the drill team. See her 'before' and 'after' below.

In a flurry of rhinestones, tiny feet and swinging ponytails, the drill team has hosted Junior Jewel clinics since the founding of the team 10 years ago. Girls ranging from Kindergarten to sixth grade have poured into the gyms, learned a dance, played some games, hung out and performed with the Sapphires. Due to this long standing tradition, several current Sapphires have old memories of coming to the clinics as a participant and new memories of being on the other side as a host. Use the slider to see ‘then’ photos of the girls as junior jewels versus ‘now’photos of them as Sapphires.

Sophomore Bridget Aaron has danced on Sapphires for two years, but looked up to them for years. Her sister, Kristen Aaron, is a Sapphire Alumni; due to this, she attended every clinic she could. She has danced for 13 years on the Wylie Drill team (where her costume above is from), McMillan Dazzlers and Sapphires and plans to continue as a professional choreographer. “It’s amazing being on the team after watching them for so long,” Aaron said. “It feels like my dreams are finally a reality.”

Sophomore Sergeant Audrey Wentz has been a member of Sapphires for two years, but has been a dancer since she was 18 months old. “I am so proud to be on this team because as a little girl attending the clinics, I always admired the older Sapphires,” Wentz said. “It was just crazy for me to make the team because I grew up dreaming about making it.”

As a two year member of Sapphires, sophomore Halli Fulton knew she had reached her goal when she saw her name on the team list. “When I made it to freshman year, I was so excited and honored knowing that I had pushed myself to achieve my goal,” Fulton said.

Freshman Emma Haney is a Sapphire rookie but admired them since she was 6 years old. “Being a Sapphire is kind of unreal,” Haney said. “I remember being 6 and 7 years old and looking up to all the Sapphires and I couldn’t wait to go to high school so I could try out. When I made it, it was the best feeling ever. All of my hard work from all those years of practicing finally paid off.”

Sophomore Skylar Farnham has been a member of Sapphires for two years and a dancer for 14. With her mother, theatre director Mrs. Andrea Farnham, Skylar has been looking up to the team since its founding. “It feels so good to be a Sapphire because I have watched them for so long and spent so much time training to make it and be where I am now in dance,” Skylar said. said.

Senior Sergeant Jordan Smith has been a member of Sapphires for four years. “Being a senior Sapphire after going to the clinics for so long makes me feel old, but those clinics are what made me want to be a Sapphire one day,” Smith said.

Senior Lieutenant Lauren Young has been a member of Sapphires for four years but a dancer for eight. “After going to so many Sapphire clinics when I was younger, it is so cool to be in a position that my younger self looked up to,” Young said. “I hope that all the other girls at the clinics look up to me as a Lieutenant.”